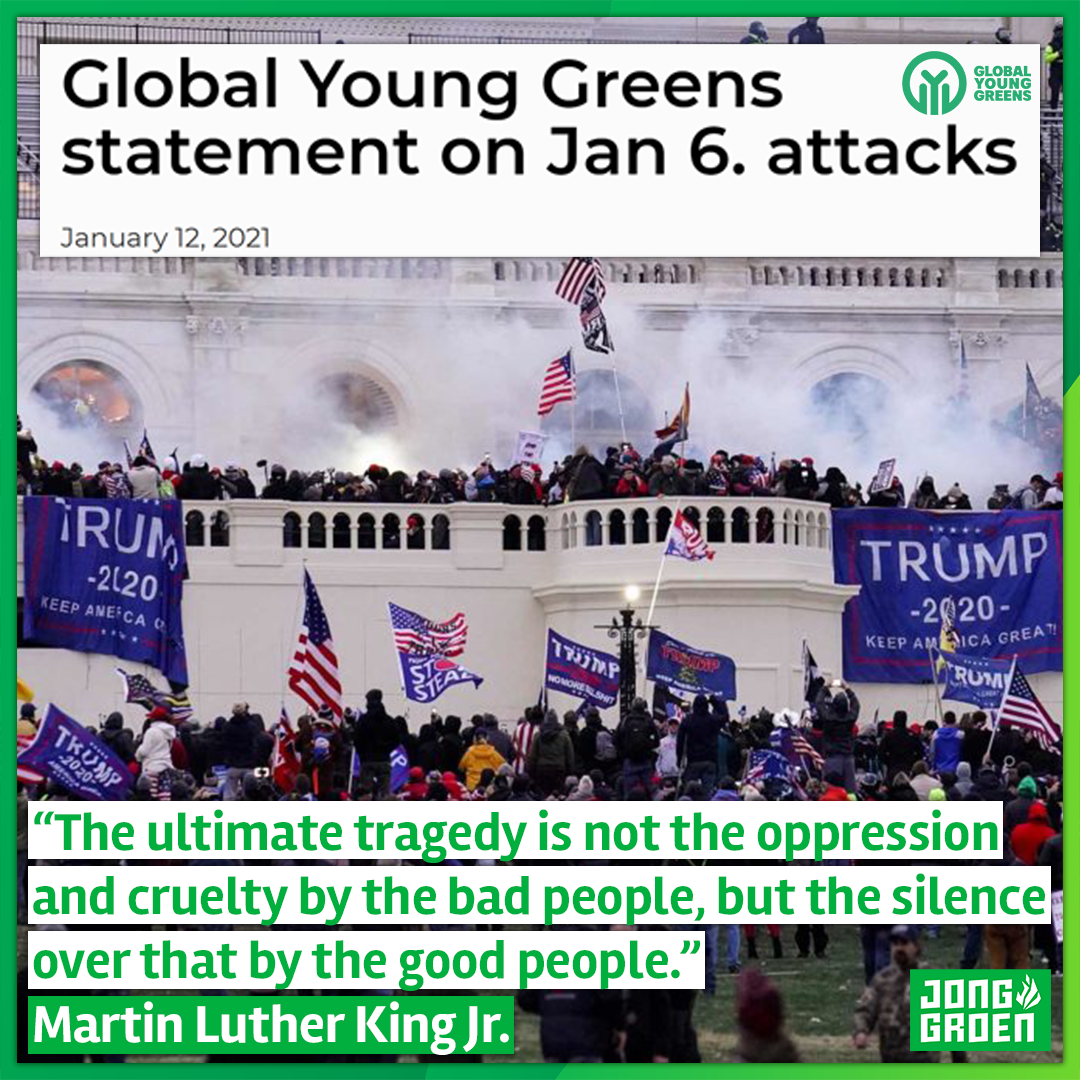 We, Young Greens around the world, are horrified at how a day of infamy has unfolded in the United States. We saw how the Capitol was invaded, its offices and chambers ransacked, and the safety of people working inside put under grave danger, all because one man can not accept his defeat in a democratic process. However, we are not surprised that such an attack on democracy would take place at the boiling point of mistrust, deceit, and hate. The gross denial of truth of an individual and its clique has caused one of few murderous transitions of power within a democratic country.

“The ultimate tragedy is not the oppression and cruelty by the bad people, but the silence over that by the good people.”

We are also angered at the glaring display of double standards by law enforcement in this rampage. We saw how an armed white mob breached the beacon of democracy, wreaked havoc, threatened lives, and walked away scot-free; while our unarmed friends and allies of color marching for social and racial justice last summer were met with excessive police force. This took place amid a backdrop of persistent attacks against minorities, be it indigenous peoples, immigrants, people of color, members of the LGBTQ+ community and others, around the world.

We cannot in good faith say that we never saw this coming. It is a culmination of years of legitimising the far-right and its antidemocratic ideals. The damage and loss of life on January 6th, together with those brought about by the crises of healthcare and of racism in the country, are all on Donald Trump, the enablers within the Republican Party, and other ringleaders in and out of the political establishment.

Let this be another lesson to us on the dangers of legitimising the far-right around the world. There are enough examples in our own history, from a world war and countless other armed conflicts, to subtle yet hostile hijacking of civil political discourse across the globe. Today, we are still facing important threats to the same democracy and equal justice we hold dearly. We see leaders of the far-right rise into power on the pretence of defending conservative values. Scratch beneath the surface and we see their conviction in the supremacy of a racial group, their express contempt for democracy and their blind belief in mob rule rather than that of the law.

We should stay firm in condemning the far-right and call them out for what they are: fascists stopping at nothing to dismantle the rule of law and the human values we have been long defending. We should stay vigilant and continuously push back against giving these groups and their followers any platform to spread their destructive propaganda. We cannot stress enough the importance of making people aware of the dangers these elements pose to our society. Moreover, the potential danger of mere words on every platform, online or offline, should be more salient than ever in every political discussion and every political decision.

At the same time, we should keep our commitment to work with people who believe in democracy and cooperatively solve the social, environmental, and economic challenges we currently face. We have a duty to leave this planet in a more just and more liveable state for future generations, which we will only be able to achieve in a society based on common values of democracy and equal human and social rights for everyone. 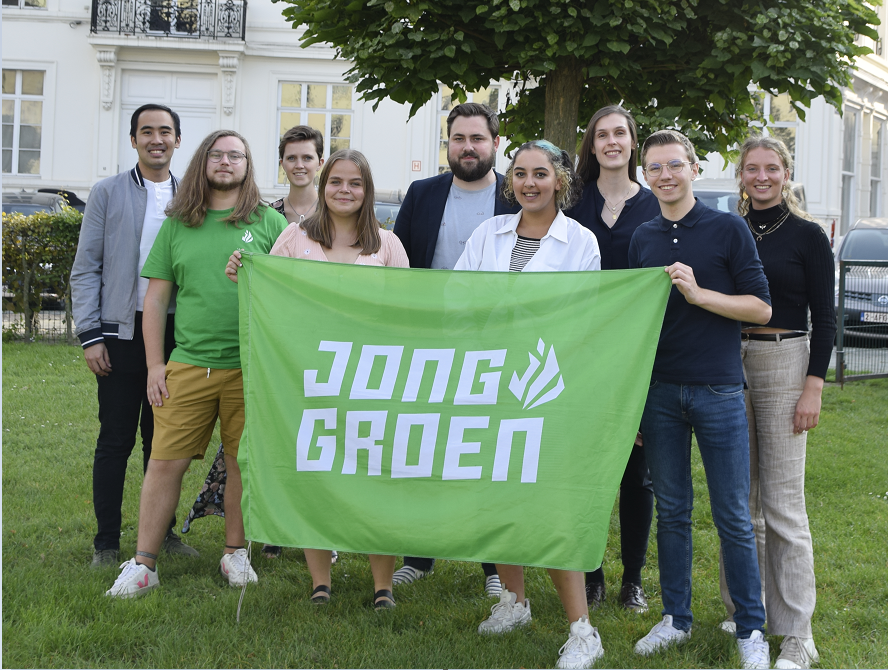 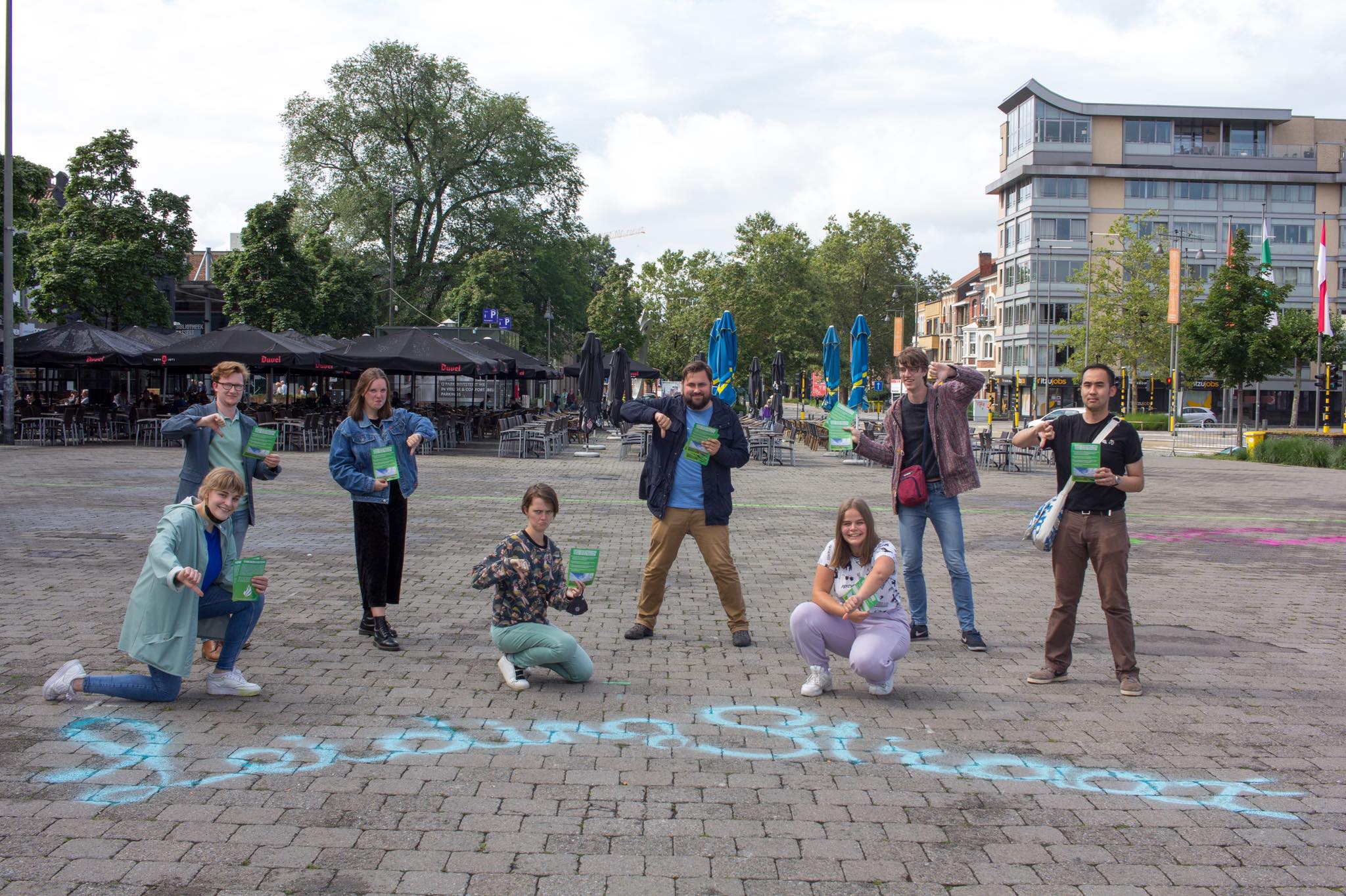